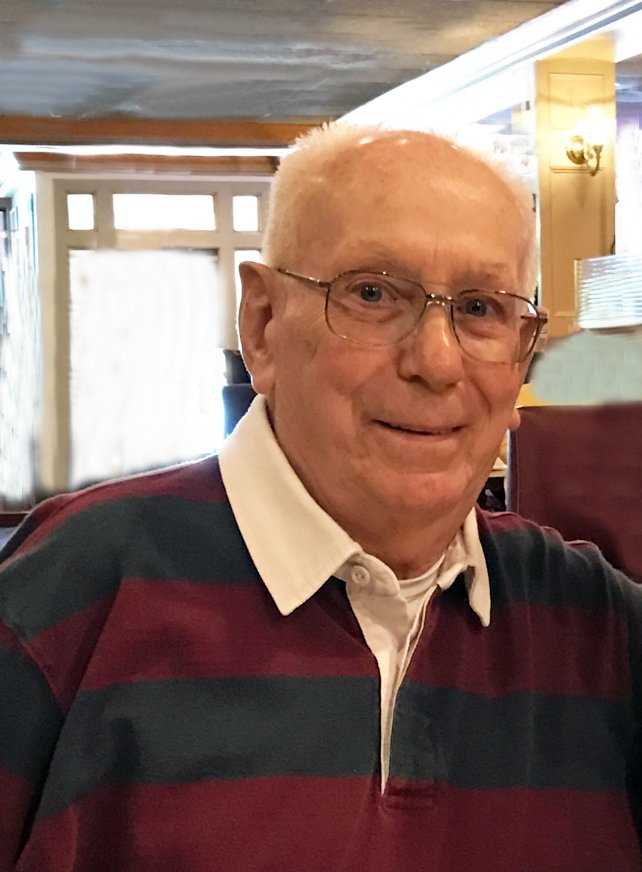 click on this link to view funeral services Monday, Dec. 28 at Noon

Robert E. Potter, a Burlington resident for over 54 years, passed away after an extended illness at the Lahey Clinic on 12/21/2020. He was 84 years old.

Born in Stoneham, he was the son of the late Mary (Brophy) and Earl Potter. He graduated from Medford Technical School and after graduation began his career as a Forklift Mechanic working at Brodie Forklift Company and then for Hyster Forklift Company where he worked for many years before retiring. He served in the U.S. Navy Seabees from 1954-1964 and had been a member of the Stoneham Elks.

Bob always enjoyed ballroom dancing and met his future wife, Diane, at a dance and knew that she was the girl he was going to marry. She was his perfect dance partner on the dance floor, and they had 57 wonderful years as husband and wife.

They married in 1963 and eventually settled in Burlington in 1966 to raise their son and daughter. Bob was a true family man and when his children were young, he decided to buy a pop-up camper where they would spend many fun summers at Brandy Pond in Maine camping with friends. Later in life, Diane and Bob enjoyed taking day trips to Maine and made several trips to Virginia to visit with their son and family.  Bob loved his neighborhood where everyone helped each other, and where many long-lasting friendships were made.

Bob was a thoughtful and compassionate man, he made friends easily and never forgot a name.  During his illness he appreciated the care he got at the Winchester Cancer Care Center-from his doctors, nurses and staff-he was treated more as a friend than a patient.

Bob was the devoted husband of Diane (McIntire) Potter. He was the loving father of Christopher Potter and his wife Andrea of Virginia Beach, VA, and the late Nancy Potter-Geswell. He was the father-in-law of Arthur “AJ” Geswell and proud and loving grandfather of Nathan, Taylor and Chole Potter and Robert (Robbie) and Katherine Geswell. He was the brother of Thomas Potter and his wife Donna of Danvers and the late Richard Potter. He was the brother-in-law of Carol Ann and Bill Hurteau, Susan and Michael Aucoin and the late Paul and Peter McIntire. He was the devoted and much-loved nephew of his 106 year-old “Auntie” Rose (Brophy). He is also survived by many nieces, nephews, cousins, and friends.

A visitation will be held at the Edward V. Sullivan Funeral Home, 43 Winn St., Burlington (exit 34 off Rt. 128/95, Woburn side) on Monday, December 28th from 10-Noon. A private Family Service will be held at Noon. Services will conclude with a burial in Pine Haven Cemetery, Burlington, MA. Memorials in Bob’s name may be made to the Winchester Cancer Care Center, 620 Washington Street, Winchester MA, 01890. For directions, obituary, online guestbook, and video tribute, see www.sullivanfuneralhome.net

Share Your Memory of
Robert
Upload Your Memory View All Memories
Be the first to upload a memory!