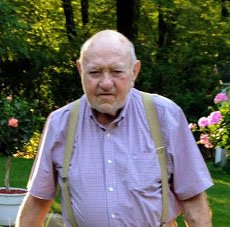 Alan R. “Mac” McCarthy, passed away peacefully on Monday morning, November 18, 2019.  He was 84 years old.  He was the oldest of four children born to Joseph and Pauline McCarthy.  He grew up and was educated in Somerville.  He was a member of the Somerville High School Class of 1953 where he played football..  After graduating, he enlisted in the Marine Corps and served during the Korean War.    He was employed at Polaroid Corporation for 38 years.

Mac married his wife, Roselyn, in 1957 and they settled in their forever home in Burlington in 1965.    He was a dedicated coach Burlington Pop Warner Football for 18 years.    He had a regular spot in the stands of Burlington High School with his friends, to cheer on the Red Devil Football team.  He followed all the college and professional teams and could call the game as he watched.  He served as a member of the Library Trustees in Burlington, Historical Society, and helped in the restoration efforts of the Grandview Farm.

Mac’s life revolved around his family.  He and his wife Roselyn spent 62 years together, bringing 6 children into this world, and then seeing a next generation of 7 more grandchildren.  When his children were young, his home, backyard, and pool were always filled with his children and their friends.  He followed and supported all his children and grandchildren’s activities and sports.  He even learned all about the games of soccer and lacrosse so he could better encourage his grandchildren as they played.  There were countless family vacations, summer pool parties, holidays, and family celebrations.

A Mass of Christian Burial will be celebrated on Saturday, November 23 at 10 a.m. Relatives and friends are respectfully invited. There will be no visiting hours and the burial will be private.  Arrangements by the Edward V. Sullivan Funeral Home, Burlington. For directions see www.stmargaretburlington.org

Share Your Memory of
Alan
Upload Your Memory View All Memories
Be the first to upload a memory!