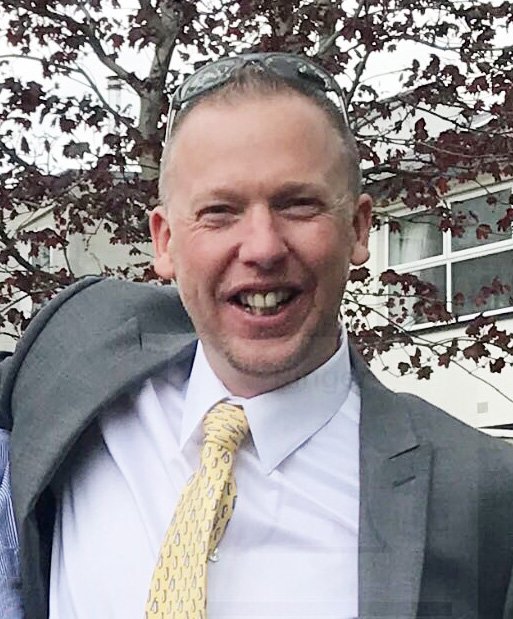 Mark Gerald Laverty, owner of Celtic Plumbing, passed of an apparent heart attack on Saturday, November 9, 2019.  He was 44 years old.  Mark was born and raised in Downpatrick, Ireland.  He was one of 7 children born to Gerald and Anne Doreen Laverty.  After high school, he went to trade school to learn to become a plumber.

Mark came to the United States 1998 to earn his pilot’s license.  He quickly earned his license and took a bus from Florida to Boston to work for a friend to earn his way back to Ireland. Along the way he met his future wife, Alexandra, at Clery’s where she waitressed.  They were married in 2002 in Cambridge and then went back to Ireland in 2004 to celebrate their marriage with his Irish family.

Mark had an incredible work ethic, was always in perpetual motion, and would do anything for his family and friends.  He built his home in Burlington 12 years ago.  He started his own company, Celtic Plumbing, at about the same time.  He was a perfectionist.  His plumbing was like artwork and his customers valued his craftmanship.  He was currently renovating his newly purchased rental home on Cape Cod.  He was looking forward to spending time with his family their and at the beach.

Mark was in the Army Cadets as a teenager, and would try his hand at any sport. He mostly loved to play soccer and tennis and swim with his kids. He encouraged them to take on any challenge.  He was an avid boater and loved to try his hand at fishing. He could kiteboard in the summer and ski in the winter.  He loved to travel and went to Ireland, France, Africa, and Florida.  He was looking forward to slowing down his work and start traveling more with family and friends. He loved to entertain his kids with his escapades and life experiences in hopes that they would remember their dad and smile (and laugh).  Mark was a bright shooting star that entered hearts of family and friends bringing laughter, adventure and love. His star faded too soon.

Mark was the beloved husband of Alexandra. He was the proud and loving father of Jack, Cora, and Ava Laverty. He was the devoted son of Doreen Laverty and the late Gerald Laverty of Ireland. He was the brother of Gary Laverty, Elaine McLaughlin, Linda Monan, Leona Murphy, Helga Laverty, and Petrina McComisky all of Ireland.  Mark was also survived by many nieces, nephews, and friends.

Relatives and friends may pay their respects at the Edward V. Sullivan Funeral Home, 43 Winn St., Burlington (exit 34 off Rt 128/95, Woburn side) on Saturday, Nov. 16 from 1-4 p.m. Services will be private.  Please omit flowers.  Memorials may be made to the gofundme.com (search Mark Laverty) for the Laverty Children Scholarship Fund  . https://www.gofundme.com/f/mark-laverty-childrens-scholarship

Share Your Memory of
Mark
Upload Your Memory View All Memories
Be the first to upload a memory!