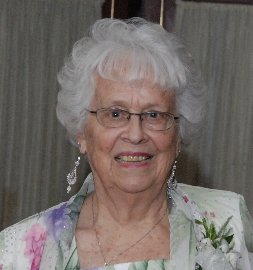 Mary R. Forand, a woman of faith and family passed away peacefully on Tuesday morning, October 29, 2019 at the age of 95. Mary grew up in Watertown where she was one of 6 children born to Theodore and Ellen Nielsen.  She graduated early from Watertown High School as a member of the National Honor Society.  She married her high school sweetheart, Robert Forand at the age of 19.  They made their home in Belmont from 1943 until 1984.  Mary wanted to have a large family and that she got, 8 children, 22 grandchildren, and 34 great grandchildren.  Mary stayed busy managing their home and raising 8 very active and energetic children.  Her love was unconditional.  She was the emotional backbone to the family holding a place for everyone’s feelings and emotions.  She was there to tend to her children’s bumps, bruises, heartaches, triumphs, missteps, and all the drama growing up and as young adults.  For her children, summers were spent at their cottage in Scituate.  The family spent the entire summer there as a family for 20 years.  She loved when she became a “Nanny” and then to be a “Great Nanny”. She was always there to lend a helping hand in raising her grandchildren and giving their parents some respite by having sleepovers and taking them on vacations.  She would never have believed that she would be blessed with such a large clan.

Mary was also a woman of deep faith.  She was a longtime parishioner of St. Luke’s Church in Belmont.  Every Sunday she marched her children off to church.  She was a member of Lady’s Sodality at St. Luke’s Church as well.  As part of the sodality, she volunteered for many years at the Fernald School in Waltham.  When she moved to Burlington in 1984, she became a parishioner at St. Margaret’s Church.  She went to mass every day, prayed her rosary, and had a litany of devotions, interceding for her family and friends.  Her family is comforted that all her prayers have been answered and she will be reunited in heaven with her husband, Bob, her son Paul, her grandchildren Allie, James, and Robbie, and all her family and friends that have passed.

Mary was the beloved wife of 70 years of the late Robert D. Forand.  She was the loving mother of Robert Forand & his wife Kitty of New Smyrna, FL, Nancy Forand of Rochester, NY, Donald Forand & his wife Rhonda of Boxborough, Marie Bonfiglio of Belmont, Anne Basile of Acton, Donna Forand of Tewksbury, Ruth Fanelli of Edgewater, FL, and the late Paul Forand.  She was the sister of Eleanor Stewart of Tewksbury, and the late Theresa Tortorello, Richard, Theodore, and Edward Nielsen.   Mary was the proud “Nanny” of  22 grandchildren and “Great Nanny” to 34 great grandchildren.

A visitation will be held at the Edward V. Sullivan Funeral Home, 43 Winn St., BURLINGTON (Exit 34 off Rt. 128, Woburn side) on Friday, November 8 from 4-8 p.m. Funeral from the Sullivan Funeral Home on Saturday, Nov. 9 at 9 a.m. Followed by a Mass of Christian Burial in St. Margaret’s Church, 111 Winn St., Burlington at 10 a.m.  Interment in Pine Haven Cemetery, Burlington.   In lieu of flowers, memorial contributions may be made to the American Heart Association, 300 5th Ave, Waltham, MA 02451 or www.heart.org. For directions obituary & online guestbook see www.stmargaretburlington.org or www.sullivanfuneralhome.net

Share Your Memory of
Mary
Upload Your Memory View All Memories
Be the first to upload a memory!