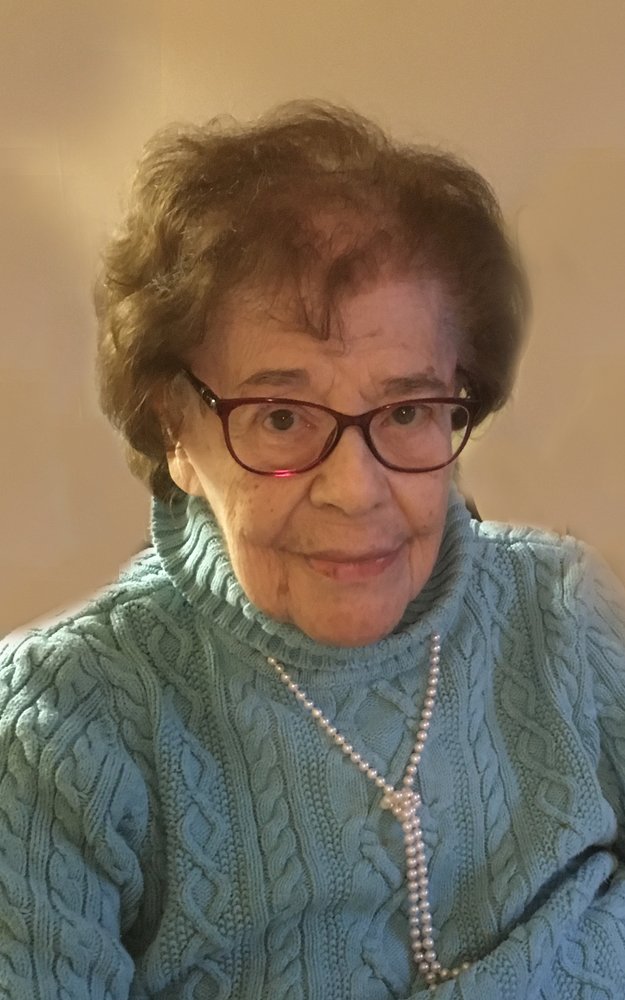 Mary Gardekas Panagotopulos, age 98, passed away peacefully on October 22, 2019. Mary was born on May 23, 1921 in Springfield, MA, the daughter of the late John and Rena (Rallis) Gardekas who immigrated to the USA from Langadia, Greece. She is predeceased by her loving and devoted husband of 58 years, Spero Vasili Panagotopulos, and his siblings Nicholas, Steve, Georgia, Timothy and Peter, and by her brother, Arthur Gardekas and her sister, Stella Gardekas. She is survived by her daughter Angela Guerra and her husband Anthony, her daughter Kathryn James and her late husband Peter James of Chicopee, her son John Panagotopulos his partner Lori Cole of Westfield, and his former wife Debra Panagotopulos of Chicopee, and five grandchildren who she cherished; Christopher Guerra, Joseph Guerra and his wife Julie, Gregory Guerra and his wife Alena, Lynne Panagotopulos and her husband Jeremy Jamilkowski, John W. Panagotopulos, Jr. and his partner Jenn Hunter. Mary had four great-grandchildren about whom she spoke constantly, Paige, Katherine, Adrianna and Declan Guerra. She also leaves her cousins Florence Rallis Kowalchuk, James and Pauline Miamis, her dear friend Ellie Godin, and several nieces and nephews. Mary grew up in Bristol, CT and graduated from Bristol High School in 1939. Following graduation she worked at Wallace Barnes and at Veeder Root where she was a dictaphone and comptometer operator. She was a noon mother for 34 years at the Anna E. Barry School in Chicopee, where she was known as Mrs. Mary. Her favorite part of the job was meeting the kindergarten children each year, saying they kept her young. Mary loved the music of Mario Lanza, Glen Campbell, and John Denver, Vichy water, licorice, Moxie, the first peach of the season she ate each summer, weeping willow trees and basking in the sun in her yard. Most of all she adored the color pink. Among her many talents were making the flakiest pie crust ever, and playing the piano by ear using only the sharps and flats-- never the white keys. She was shy about performing and did not permit anyone to be in the same room with her as she played. Mary was known to her family as the "time keeper", always planning ahead. She loved to walk. She walked three miles each day and always returned home invigorated. Mary was a truly amazing and remarkable woman with a strength and spirit that was admired and will be remembered by all who knew and loved her. She accepted the circumstances life presented to her with incredible grace and dignity. Throughout her life she was extremely social and was sincerely interested in people. Even in her final days and hours as family, friends, and caregivers visited, the first words she spoke were to ask about their children, spouses, and grandchildren. Mary was a member of Saints Constantine and Helen Greek Orthodox Church and was a member of the Greek Ladies Philoptohos Society.

Funeral services were held on October 28, 2019 at Saints Constantine & Helen Greek Orthodox Church. Burial was at Fairview Cemetery in Chicopee. In lieu of flowers, per Mary’s wishes, memorial contributions may be made to Sts. Constantine and Helen Greek Orthodox Church, PO Box 112, Chicopee 01021. For online condolences, please visit www.Grisefh.com

Share Your Memory of
Mary
Upload Your Memory View All Memories
Be the first to upload a memory!