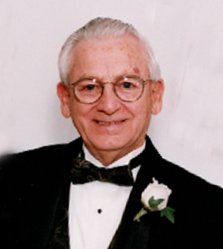 Daniel R. Ronayne, a member of the Longshoremen’s Association, Local 799, passed away peacefully at the Wingate of Haverhill Nursing Facility on Saturday morning, September 7, 2019.  He was 95 years old.  Daniel was born in the family home in Burlington in 1923.  He grew up in Burlington when it was a very small farming community, with dirt roads, the population was in the 100’s rather than 1000’s, and everyone knew everyone in town.  Burlington did not have a high school, so he went to Lexington High.  Days after Pearl Harbor, he enlisted in the US Navy.  He held the rank of Gunner’s Mate 2nd Class and served aboard the USS Cincinnati.  The USS Cincinnati was a light destroyer used convoy escorts in the South Atlantic and took part in the Operation Dragoon (invasion of Southern France). He remained in the Navy after world War II and was honorably discharged in 1948.  He was the recipient of the World War II Victory Medal, American Area Medal, European-African-Middle Eastern Medal.  He was proud of his military service and continued his support of the Armed Forces as a member of the Disabled American Veterans and American Legion.

Daniel returned to Burlington after his military service and took a position as a longshoreman at the freight terminals in Boston Harbor.  He spent almost 40 years working on the docks.  At the end of his career, he was responsible for the maintenance and repairs of the lift cranes, tugs, and yard equipment.  Dan had a mechanical mind and loved working with his hands.  He could fix almost anything at home or at work.  He learned all his carpentry skills from his dad.  They built Dan’s home together.  They also built 5 more homes together in the Winnmere section of Burlington.  He was always there to help his family and friends whenever they needed a helping hand or something repaired.  He had spent the last 30 years living in Haverhill.  He was a strong believer in living an active lifestyle.  He regularly worked out and was proud to be the oldest member at the Salem, NH Athletic Club.  He kept his mind sharp by playing scrabble.  He was always out and about.  He loved going to events and socials where he could get out on the dance floor.  He loved his family and was so proud of his children, grandchildren and great grandchild.

Dan was the beloved husband of the late Ann M. (Harrington) Ronayne.  He was the 30 plus year loving companion of Bettina “Betty” Long of Haverhill. Dan and Betty loved to travel, dance, and enjoy the company of each other’s family.   He was the loving father of John J. Ronayne of Woburn, Daniel R. Ronayne, Jr. of Burlington, Regina M. Skinner & her husband Bob of Tewksbury, Kathleen Capobianco & her husband Bruce of Burlington, and the late Richard J. Ronayne. He was the brother of the late Francis, Ernest, & Richard Ronayne, James Kavanaugh, and Helen Keith. He was the proud grandfather of Sara, Brian, & David Capobianco, Christopher Ronayne, and Joshua Morgan. Great grandfather of Jackson Ronayne.  A visitation will be held at the Edward V. Sullivan Funeral Home, 43 Winn St., Burlington (exit 34 off Rt. 128/95, Woburn side) on Thursday, September 12 from 4-8 p.m. Funeral from the Sullivan Funeral Home on Friday, Sept. 13 at 9 a.m. Followed by a Mass of Christian Burial in St. Malachy Church, 99 Bedford St., Burlington at 10 a.m. Services will conclude with a burial in Chestnut Hill Cemetery, Burlington. Memorials in Daniel’s name may be made to Alzheimer’s Association,309 Waverley Oaks Rd, Waltham, MA 02452  For directions obituary & online guestbook see www.saint-malachy.org or www.sullivanfuneralhome.net